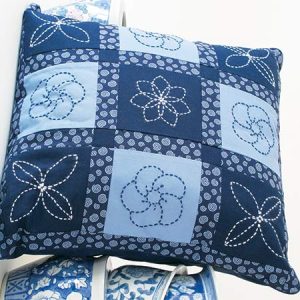 Summer is a time of white fluffy clouds, flowers in every colour of the rainbow, the green of leaves and the sounds of birds and children’s laughter in a nearby park. We think of summer as fresh and happy. The art of Sashiko promotes the same feelings with its white evenly spaced stitches and images of nature.
For her Sashiko summer pillow, designer Alma Laidlaw chose the traditional blue and white of Sashiko in a softer blue than the traditional dark indigo. She used a lighter blue thread for the images. The nine-patch design can be used as is or quilting can be added for more depth and texture.
“I wanted to create something simple that would introduce people to Sashiko,” Alma explains. “One of the beauties of Sashiko is its simplicity. It proves that something doesn’t have to be complicated to be beautiful and I want people to try this and not be intimidated.”
Alma was introduced to Sashiko by her son who gave her Mary Parker’s Sashiko by Machine one Christmas. She was inspired to try the technique, but eventually moved to the traditional hand done technique.
“Sashiko is a quilting and embroidery technique,” Alma continues. “If you stitch the design through three layers, it’s a quilting technique. But, if you stitch it on only one layer, it is embroidery. The latter is much easier.” She suggests doing the design for the pillow as embroidery and then quilt in the ditch around the blocks to make it a quilted project.
Alma was taught to sew by a teenage girl who looked after her when she got home from school while her mother worked.
Read more in our Summer 2009 issue.