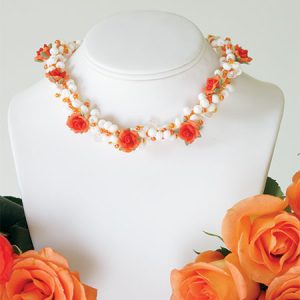 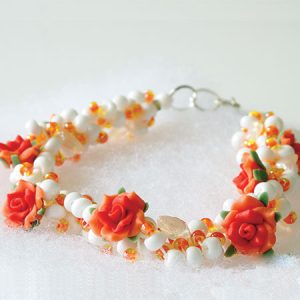 As we bare our skin to enjoy the warmth of the sun, why not display some “attitude” with this bead crochet necklace from designer Diane Reda. Some bright coloured beads or unusual shapes will get you noticed if you make this project to wear to a summer barbeque or wedding. Diane’s version uses polymer clay flowers she found on a trip to Toronto.
“These flowers made me think of summer,” Diane comments. They are also only one style of the thousands of beads, stones and findings she has collected since becoming a jewellery designer nine years ago. She now travels to Toronto, New York and Venice to look for beads to turn into her next piece of jewellery. She admits she prefers “high end” beads, such as those made of crystals and semi-precious stones, because they add richness to the finished piece.
“This project doesn’t require high end beads, but you could substitute better beads,” says Diane encouragingly. “I chose these beads because they reminded me of summer, but once you learn the technique you can use any type of bead you want.”
Diane developed a passion for beading after encouraging her younger sister to take up the art. Instead, she became caught up in the design process and admits to being obsessive about it. “My mother was good with her hands and she sewed, crocheted and painted, but I discovered I have a passion for beading that I never imagined.”
When Diane was contemplating retirement from her career at a law firm, she decided to begin developing her beading skills so she would have another job after retiring.
Read more in our Summer 2009 issue.