Thank you for visiting us to see who makes up our cast of editors and contributors at ANPT! The team is made up of skillful, knowledgeable, personable ladies with a strong passion for what they do. They are experts in their respective categories of needlework, who also enjoy other forms of needlework. They bring to ANPT magazine the most inspiring works from across Canada in every fabulous issue! John, the gentleman of the team, pushes the enterprise forward with his excellent business skills and makes each issue look its very best! – Carla 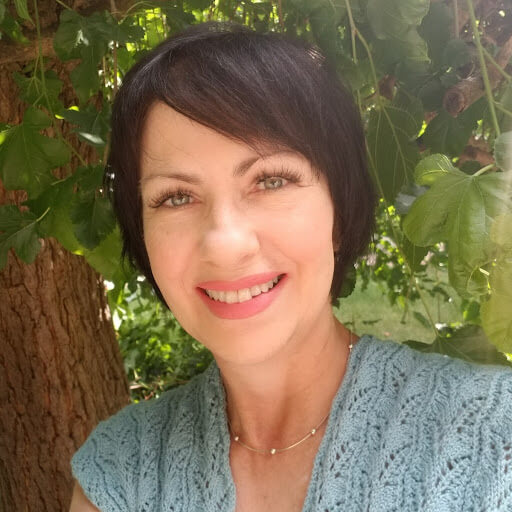 As a child, Carla was always fascinated with her mom’s sewing and was close by every time her mom was at her sewing machine. Her mother had a passion for sewing from a young age and because of her, Carla developed an appreciation for sewing with beautiful fabrics. Carla also learned to knit from her grandmother who was an excellent knitter! But being busy with school, learning classical piano and swimming, she hardly had any time to get actively involved in needlework.

She was born of Italian parents in Montevideo, Uruguay, and they immigrated to Montreal when she was 3 years old. Her father was a barber on weekdays and a professional musician on weekends.

By the time she started grade 2, she could speak Italian, Spanish, French and English, which later inspired her to get her Bachelor of Arts in Modern Languages at McGill University.

She married John De Fusco after graduating and worked for RBC and SunLife, where she learned the art of good customer service.

They moved to Newmarket, Ontario in 1990 where she was introduced to cross stitch on the GO train to fill the 45-minute ride to work and another 45-minute ride back home. On the train is where she accomplished a lot of stitching.

Once she started A Needle Pulling Thread magazine, her love for the needle arts flourished. She learned how to hook rugs, quilting and in 2009 she picked up knitting again; there isn’t an evening that goes by without knitting.

Carla believes that everyone can achieve their goals if they set their mind, heart and soul to them. A Needle Pulling Thread is a magazine that reflects this concept with every fibre artist she brings to the pages of each inspiring issue. The magazine also reflects that life is better with needlework. 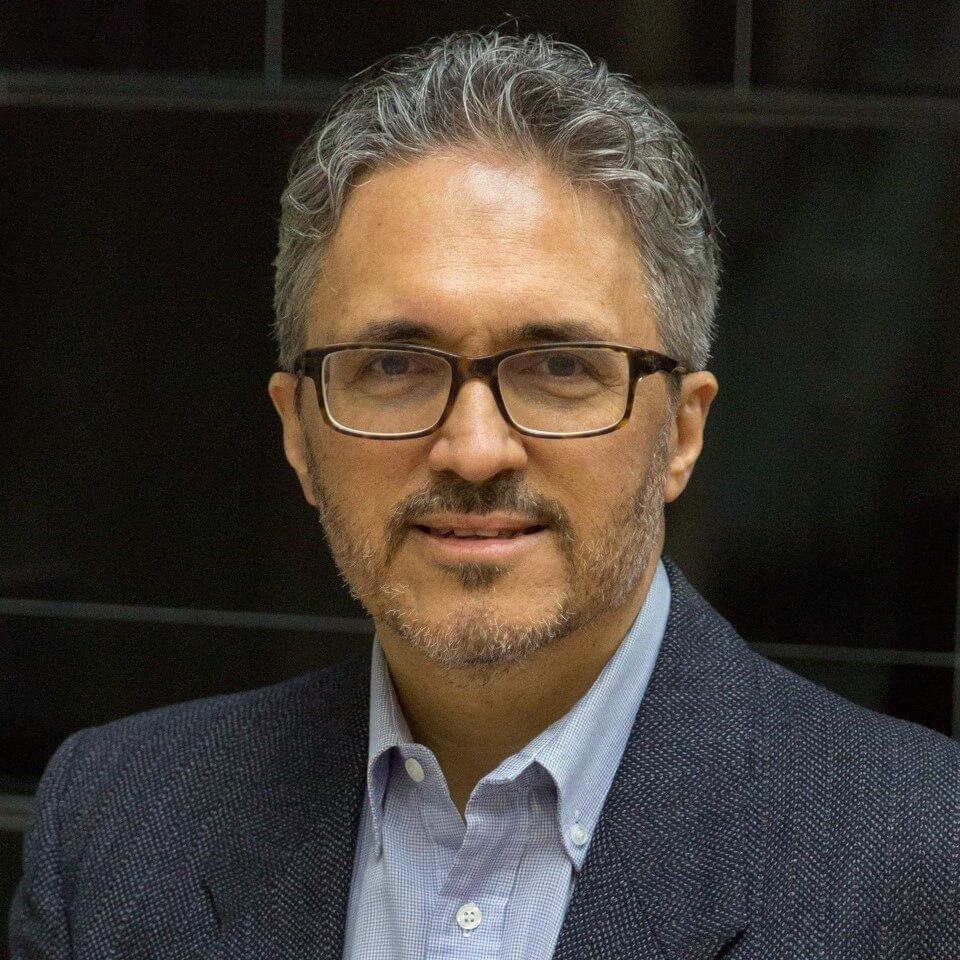 John has followed a circuitous path to the magazine publishing business, through engineering and business schools, careers in the financial, IT, and telecom industries, and a relocation from Montreal, Quebec, to Newmarket, Ontario.

John was in between jobs in 2005 when he made the decision to join Carla in her fledgling enterprise. It was certainly a leap of faith out of the comfort zone, outside of the box. Everything was going the way it was supposed to go, and they decided to turn it upside down.

Yet they wouldn’t want it any other way. It is a coming home of sorts for John. His parents immigrated to Canada from Italy and found work in the thriving “schmatta” business in Montreal. John remembers vividly the dinner table talk about the shop, the piecework, the foreman, and the union.

Though John doesn’t partake in any needlework, he still feels a very close connection. John draws inspiration from the classic films of the 30’s through 50’s, and from the fact that many of the readers of A Needle Pulling Thread grew up in the 60’s, in the era of the Beatles and Stones and Woodstock…of Vietnam and landing on the Moon. John is also inspired by his life-long passion for music and photography. But most importantly, John is inspired by Carla’s vision of a better world, and her passion for and faith in the needle arts.

John works with Carla on the photography and layout for A Needle Pulling Thread, and looks after the day-to-day business administration. John also administers the web site as well as The Needlework Pages, the online directory for everything needlework. 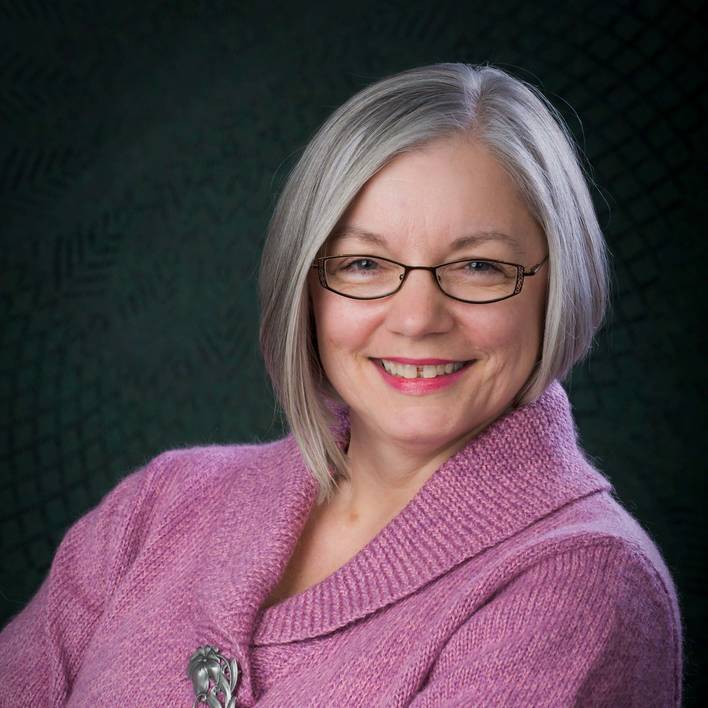 Cynthia MacDougall has been knitting steadily for almost 40 years. Her primary knitting interest is lace, but she enjoys all forms of knitting. She also spins, crochets, sews, quilts, embroiders, weaves, and makes lace in both tatting and pillow lace forms.

In the mid-1990s, Cynthia wrote articles for several craft publications and served as newsletter editor for the Huronia Spinners’ Guild. Having unearthed her passion for writing and knitting design, she founded Canadian Guild of Knitters in 2002.

For seven years she produced Knit Together, a magazine that shared information about people, products, events, and techniques related to knitting.

For seven years she produced Knit Together, a magazine that shared information about people, products, events, and techniques related to knitting.

She joined forces with A Needle Pulling Thread in 2009 to continue sharing her “love of knit!” Recent articles Cynthia has written appeared in Keito Dama, a Japanese knitting magazine, Embroidery Canada, the Canadian Lacemaker Gazette. 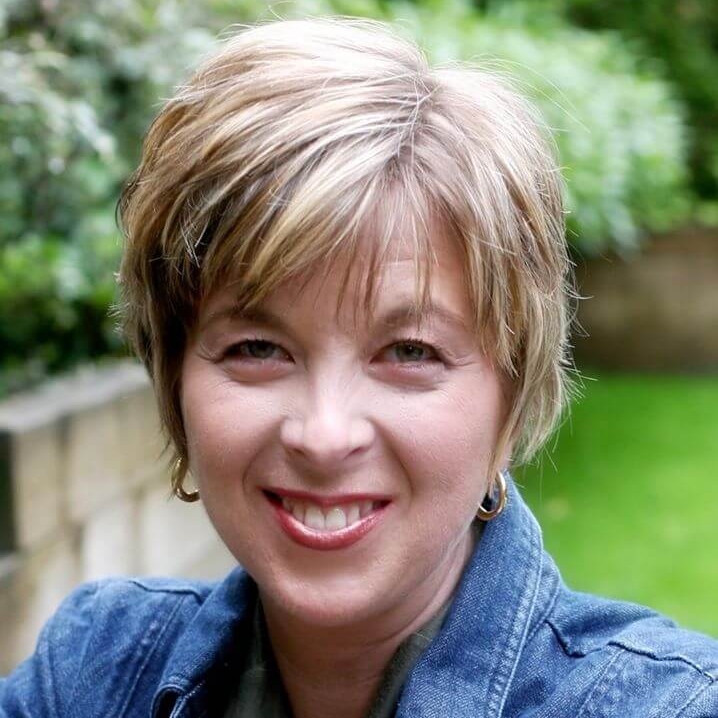 Life takes funny turns doesn’t it? Heather now write articles and designs quilt patterns for other publications, including A Needle Pulling Thread, and occasionally posts on her blog.

You can connect with Heather anytime by email. 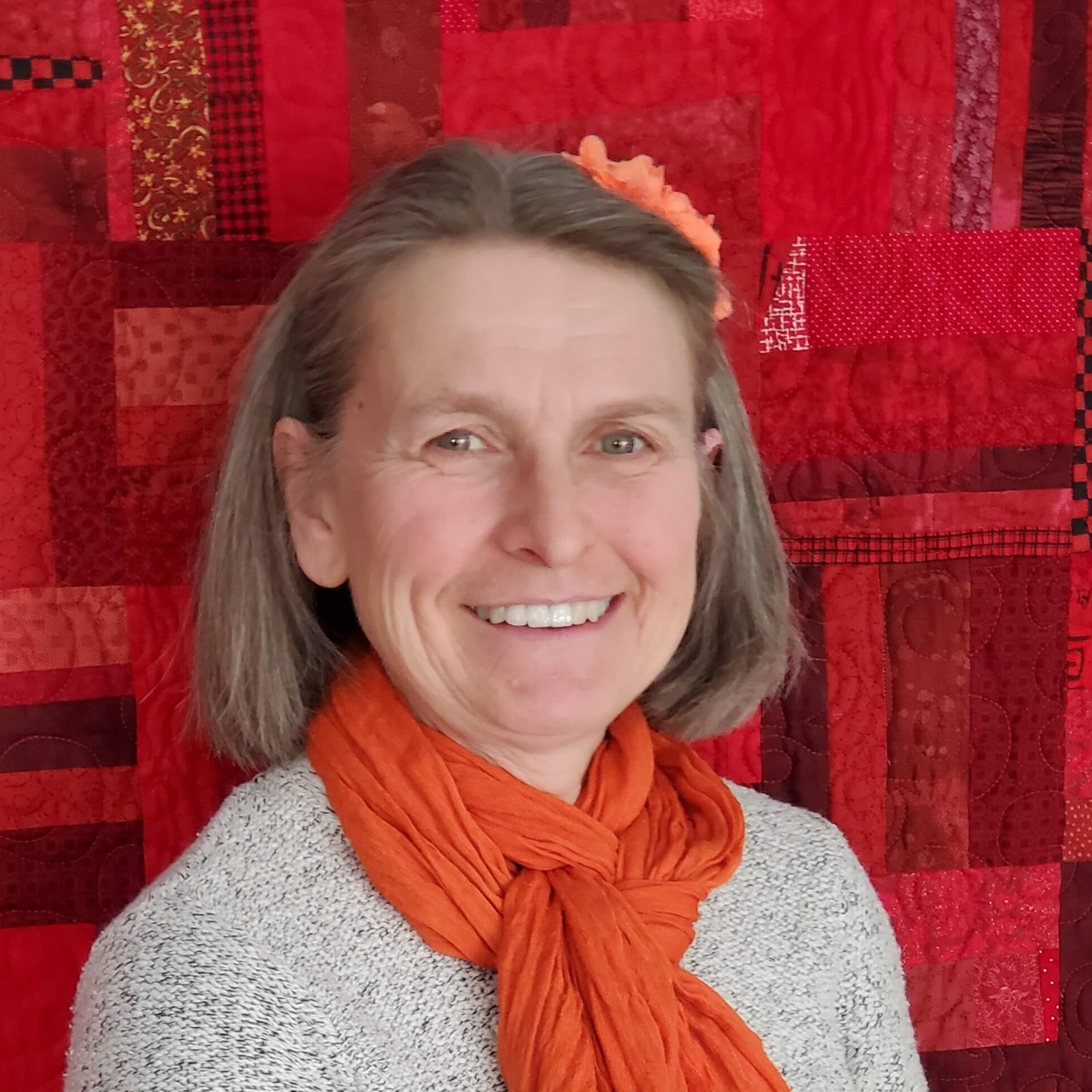 Her quilt patterns have been published in numerous quilting magazines including Quilter’s Connection, A Needle Pulling Thread, Easy Quilts, McCall’s Quilting, Fons and Porter’s Love of Quilting, and Quilts and More. 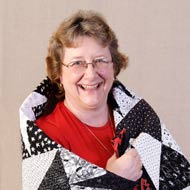 Karen enjoys a well rounded approach to the needle arts. Having learned to knit with her grandmother at an early age, she is rarely seen empty handed.

As the years progressed and new options opened, Karen tried many of them: macramé, needlepoint, embroidery, latch rug hooking, ceramics, flower arranging, origami, beading to name a few, but she always came back to knitting and quilting.

There is something about the warm coziness of a quilt or a knitted garment that just makes her heart sing!

The teaching aspect came about purely by chance. Karen took some quilting classes, showed off some of her quilts and was asked ‘how do you do that’. In explaining it, Karen found that she loved teaching even more than she loved making the projects and from there her teaching career was born.

Karen has had the pleasure of teaching at shops, guilds and retreats. She has shown her quilts both locally and internationally and won the ‘Best from outside the USA’ at the Vermont Quilt Festival in 2006.

While attending the Creativ Festival® one fall, Karen met Carla and John and proposed a beading article for A Needle Pulling Thread. The rest as they say is history; the article was written and published in the Fall 2007 issue. Since then Karen has had the honour of joining Carla and John in their Creativ Festival® booth spreading the word about this great magazine. 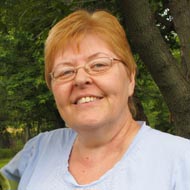 Jo Gatenby grew up in Oakville, Ontario, and has been sketching and doing crafts her entire life. She has taught classes in everything from strip quilting to cornhusk dolls, but when she discovered cross-stitch, she found her passion. When her husband (Bill) challenged her to create her own designs, she accepted the challenge and started her own company.

As X’s & Oh’s, Jo has been designing cross stitch charts based on her original pencil sketches for over twenty-five years, and her work has been on the cover of many needlework magazines over the years, such as The Cross Stitcher, Embroidery Canada and Stoney Creek Cross Stitch magazines. Over the years, this happily married mother of two (and new Nana) has been pleased to add the artwork of several artists and designers to her varied selection of designs, creating delightful cross stitch works to please both their fans, and Jo’s own faithful followers.

Jo also writes a monthly blog and sends out a monthly newsletter, both of which can be found on her website www.xs-and-ohs.com, and often teaches, or speaks, at guilds and festivals around Ontario.

Her multiple monthly releases include such themes as bewitching fantasy, whimsical Christmas, elegant wedding, touching scenes of days gone by and adorable children, and even 3D designs – her adorable snowmen and fascinator-top hats are especially popular. There is something to please everyone from this talented cross stitch designer and her team.

Jo has been a regular contributor to A Needle Pulling Thread since Spring 2008 and is happy to be able to share her talents with ANPT’s growing audience. 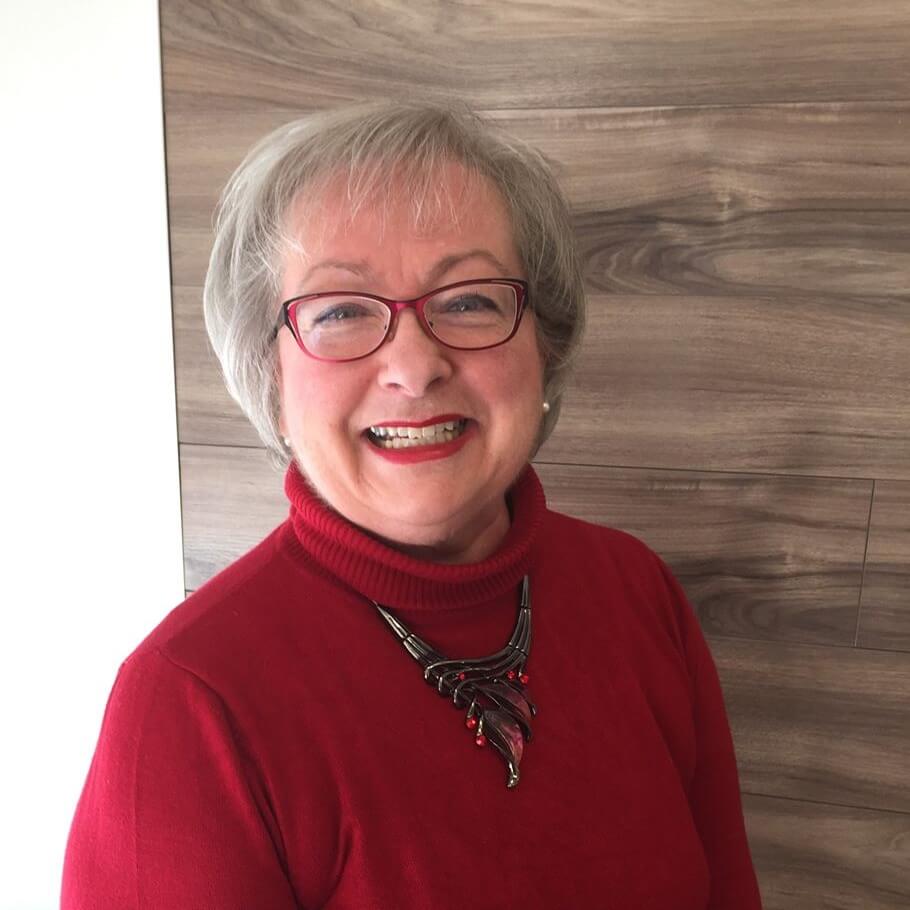 Judith Marquis is a designer and teacher of smocking, heirloom sewing, silk ribbon embroidery and other hand and machine techniques.

As a Ryerson Fashion grad she has worked in many facets of the fashion world from wholesale sales, to retail management, to manufacturing. She is a long time member and approved teacher for the Smocking Arts Guild of America. She teaches in select shops in Canada as well as from home in Newmarket, Ontario where she houses ‘The Wardrobe’, a mini store stocked with smocking and heirloom supplies.

Over the past 20 years her designs have been seen in the pages of Canadian Living, Crafts Plus, Chatelaine and A Needle Pulling Thread magazines. Her articles have been featured in SAGA News, Creative Needle and Sew Beautiful. Judith has authored two books, Interlace in Lace and Monograms & Flowers and has her own line of patterns under the name Amberlane & Amberpetites. She is the designer and V.P. at Grace L. Knott Smocking, updating a number of their patterns over the years.

Judith also embroiders, knits, crotches, tats, cross stitches, cooks, attempts to garden and loves to paint but there just are not enough hours in the day for all these since she took up teaching and designing full time! 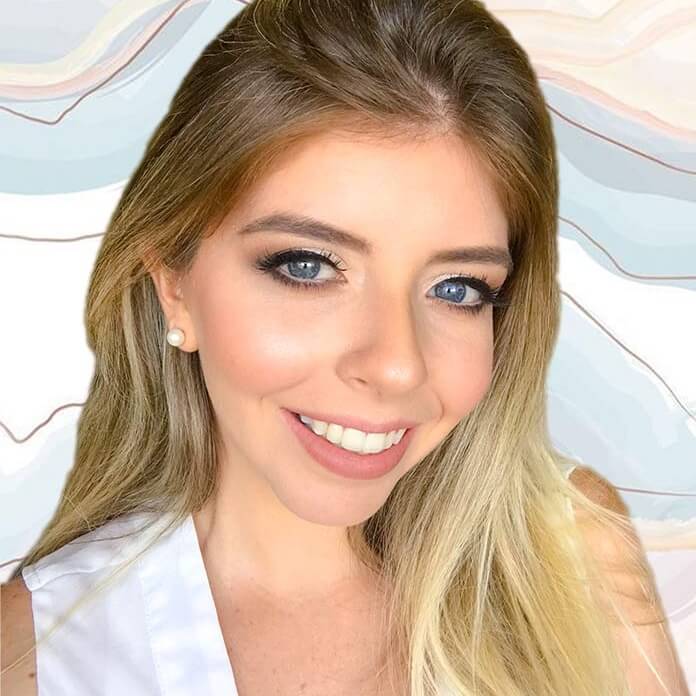 Hi! I’m from Venezuela, I’ve been a graphic designer for 7 years. I have loved computers and technology since I was a little girl. In this flourishing digital marketing age, I’m continuously learning about technology and its tools.

Graphic design allows me to express my creativity putting together modern and creative designs. I love going to the gym and I love food! Balance is the key. 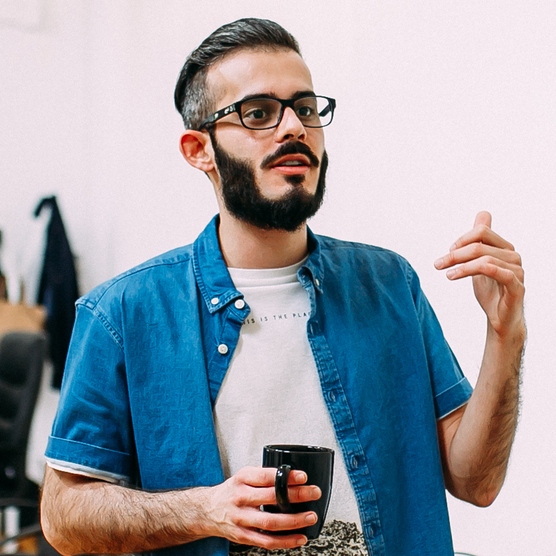 Alejandro is passionate about the digital world. This has led him to graduate as a Systems Engineer and get more than 10 years of experience in different projects related to e-commerce and digital marketing at a young age.

He collaborates with the entire digital platform of A Needle Pulling Thread, and other projects such as CRAFTalytics.