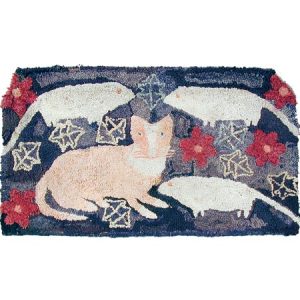 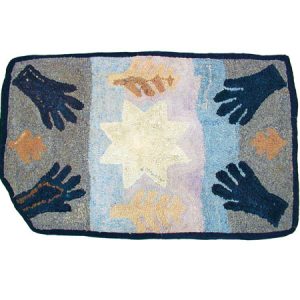 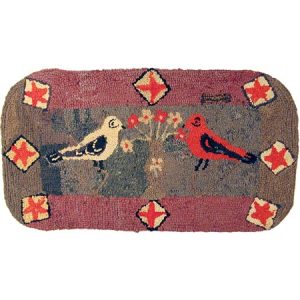 The Fibre Report with Joe Lewis

Working with Denis Longchamps, publisher and editor of the Cahiers métiers d’art ::: Craft Journal and curator on the exhibition Tapis Crochetés / Hooked Rugs January 16th – April 13th, 2008, Judith Penny Burton presented the work of four contemporary artists working in this very old tradition.
Hooked rugs began to appear in Quebec, the Maritimes and the New England coast sometime in the 1840s made of recycled strips of clothing or yarn pulled through burlap stretched tight over a frame. The rugs had a range of motifs drawn from nature, domestic, and religious themes as well as political sentiment.
Longchamps, using the Musée des maîtres et artisans du Québec’s extensive collection of historic rugs to illustrate visually his catalogue essay Hooked rugs and rural life in Quebec, presents a well grounded base from which to inform the contemporary audience. The study and collecting of hooked rugs has been ongoing for decades. Longchamps’ writing is backed with the research and collecting of ethnologist Marius Barbeau, who works for the Museum of Man (now Museum of Civilisation) and Jean-Marie Gauvreau, director of the École du meuble as well as other scholarly research. This collection is now the backbone of the museum’s collection.
With this as a springboard, Burton presents the work of four artists using this traditional “medium” to explore their own lives and extrapolate from what can be viewed as a hand made functional domestic object and give a new meaning relevant to daily modern life.
Doris Eaton, Deanna Fitzpatrick, and Margaret Forsey are from Nova Scotia, and Rachelle Leblanc is from Quebec. They have come to rug hooking from different routes and seem to have been influenced by the 1980s rediscovery and craze for collecting Grenfell Mission rugs from Newfoundland, or by the contemporary work of Nancy Eddell, rather than having learned at the feet of their grandmothers, as the saying goes. It’s because of this that exhibitions such as these are important.
Read more in our Summer 2009 issue.