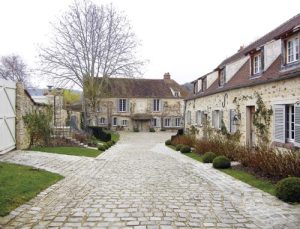 What began as a casual conversation with fellow stitchers, led the Brant Broderers on three trips abroad to learn specialized embroidery techniques. The Broderers, a needle arts guild in existence for over 30 years, meet in Brantford, Ontario, and although a small group of just over 15 members, the membership takes its needlework very seriously. The group enjoyed their first trip stitching at Hampton Court Palace, England (2007). The second one in 2011 took them to explore Montmellick Stitchery in Dublin, Ireland (2009), and the most recent trip took them to try their hand at Boutis Provençal (also called broderie de Marseille, Piqûre de Marseille).
To learn this very old stitchery technique the group stayed at the Landmark property in France, Le Moulin de la Tuilerie. This is the former country home of the late Duke and Duchess of Windsor. The building came complete with a history of the buildings and was filled with enlarged photographs of the Duke and Duchess about the house. The library in the main house contained several volumes on the history and the turmoil of the abdication, and their time in the estate.
Read more in our Summer 2012 issue.