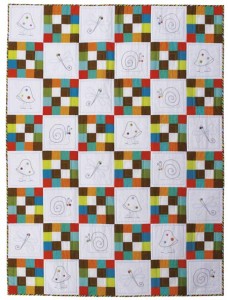 Sometimes what appears complex is the result of a simple concept. As well, what is conceived as simple can be a challenge. Before designer Monika Kinner-Whalen’s quilt project is dismissed as too complex or too simple, a closer look might reveal the opposite is true.
“I started making quilt tops before I understood how to do it properly,” the Saskatoon designer admits. “I always wanted to make quilts and thought it would be cheaper to make them, and after spending lots of money, I had a quilt!”
As a child, Monika says she played with fabric more than she played with crayons. Her first quilt was designed for her daughter and was based on the illustrations by Robin Baird Lewis in the children’s book Red is Best by Kathy Stinson. She says Lewis was flattered that she wanted to use the designs in a quilt when Monika contacted her for permission to use them. But, once that quilt was complete other members of the family wanted one and that started Monika on her journey as a quilt designer.
“When I was asked to provide a pattern for the magazine, the colours that were suggested spoke to me of the 1970s, such as the colour of the Coppertone sun screen bottle and avocado fridges,” Monika chuckles. The colours also reminded her of nature and earthiness, so she decided to use dragonflies, snails, and mushrooms in the alternate blocks. “I used triple stitching on my machine to do the embroidery, which can be painstaking, but the designs could be done by hand as well. The straight line quilting can also be challenging, even though it looks simple, because it requires staying inside the lines. This may look like a beginner quilt, but there is still some skill involved.”
Monika is passionate about quilting and fibre art and cannot let a day go by without sewing. She manages to do her creating while home schooling three children and maintaining an Etsy site.
Challenge and simplicity according to Monika can exist in the same project depending on how you approach the method needed to complete each element of the design. While the project quilt would look great in a boy’s room, the colours could be changed to reflect the tastes of a teenager or senior. It’s all about the approach, but whatever the method used to make the quilt, Monika wants the maker to have fun.
Read more in our Summer 2011 issue.