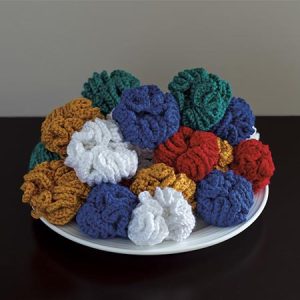 Wikipedia tells us that “pom-pon” is originally a French term which refers to ornamental spheres of decorative fluff. They can be made out of fabric, yarn, paper, plastic, or even feathers. However you spell it – here’s a fun and fast crochet project which lends itself to sociable crafting. So why not take a break from your regular sit ‘n’ stitch… and have a Pom Pom Party instead!
This ruffled pom pom can be worked in a little over 30 minutes, and once you get the hang of it, you can chat and snack and stitch away with your fellow pom pom party-ers!
Traditional yarn pom poms require some prework: you need to cut doughnut-shaped pieces of cardboard around which the yarn is wound, and then tied and cut. There are fancy commercial pom pom makers available also. With this crocheted version – you only need your crochet hook and yarn!
The ruffled pom pom can be used in place of traditional yarn pom poms. Here are a few suggestions: