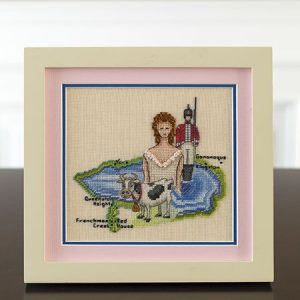 Laura was a Canadian heroine of the War of 1812. She is known for warning British forces of an impending attack that led to the British victory at the Battle of Beaver Dams. Laura and her husband, James, were very poor. Instead of portraying her in her everyday clothes, I decided to portray her in nicer clothes (white or off white) in which she may have met the Prince of Wales, the future King Edward VII. People are more inclined to stitch an elegant woman.
The velvet detail incorporated into the top of her gown is reminiscent of our fur trading past. Laura became celebrated as a heroine in history, poetry, and drama after 1860.
Legends grew; the favourite was that she had taken a cow with her on her walk, for camouflage, and that she milked it in the presence of American sentries before leaving it behind in the woods.
Laura Secord typified pioneer women in her courage, endurance, and resolution in the face of adversity. FitzGibbon remembered her as a person of “slender frame and delicate appearance,” but underneath was a strong and persistent will.
Read more in our Fall 2012 issue.

Designed by Maria E. Gollek
www.marnicdesigns.com
Aspiring to inspire before I expire