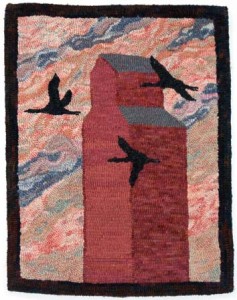 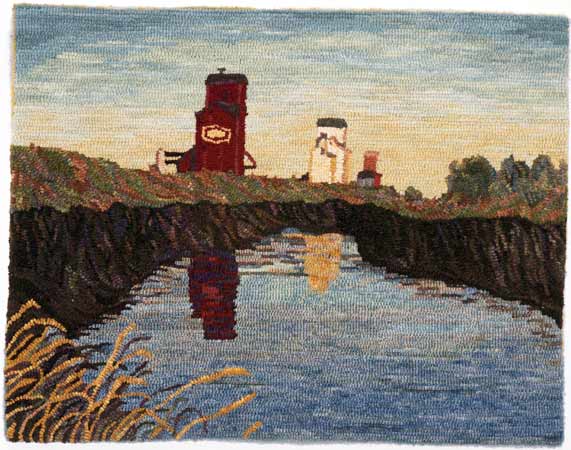 Our club, the Heritage Rug Hookers of Saskatoon, is made up of a diverse group of women of all ages and professions. We come together due to our shared passion for traditional rug hooking.
Historically, in Canada, rug hooking served both practical and aesthetic needs. Worn out clothing was hooked into a backing made from a burlap sack to create rugs for the floor that were both warm and attractive. Today’s rugs are most often made from hand-dyed wool flannel on linen backing. Recycled woolen clothing is also a popular choice. One can however use any fabric that can be cut into strips, such as cotton, denim, polar fleece, or panty-hose. Hooked items are created as wall hangings, as well as functional items such as floor rugs, tea cozies, tote bags and footstools.
We have recently undertaken an ambitious project. We surveyed rug hookers from western Canada to determine interest in hooking pictorial rugs depicting grain elevators. After receiving positive feedback and interest, we called for submissions. The plan was to seek galleries in the Prairie Provinces that would exhibit the collection of our work. At the end of 2010, we gathered the completed pieces: forty in all. What fun it was to see these creations, each unique and each depicting a grain elevator. The participating artists are from across Canada – Newfoundland, New Brunswick, Manitoba, Saskatchewan, Alberta and British Columbia. The rugs will begin their gallery tour in Saskatchewan in 2010, then move on to Manitoba, Alberta and British Columbia.
Read more in our Spring 2011 issue.

About the author;
Rita Smith is a member of the Heritage Rug Hookers of Saskatoon. She grew up on a mixed farm at Richmound in southwestern Saskatchewan. Her father was foreman of a crew that repaired elevators throughout Saskatchewan. He had no fear of heights!