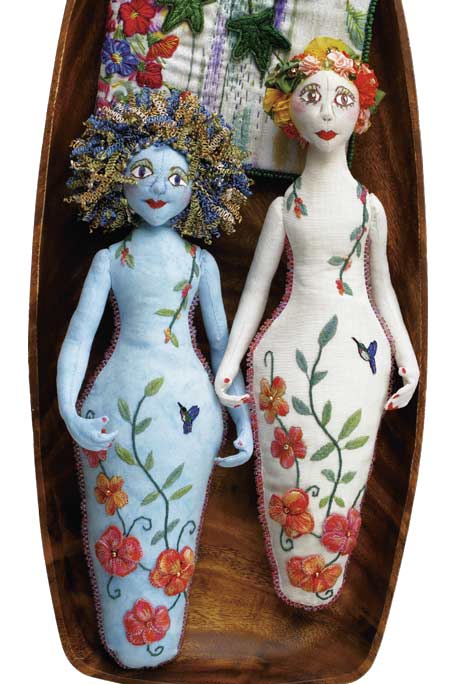 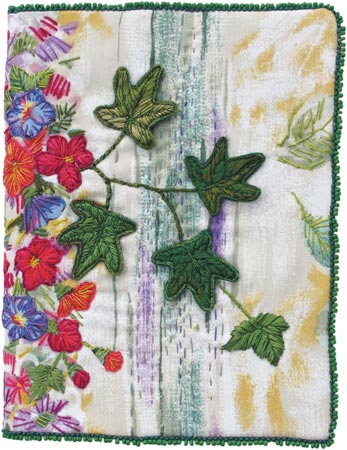 Lucy Garvin and Sherry Del Rizzo have both appeared in A Needle Pulling Thread magazine on their own, Festive 2008 and Summer 2010 respectively. They imagined it would be a fun and creative for our readers if they joined forces to create a special feature.
When they met, Sherry and Lucy were both members of the Toronto Guild of Stitchery. Sherry was known for teaching stumpwork and embroidery classes. Lucy’s interests were just changing from hand to machine work.
A chance encounter at a guild meeting started it all. Lucy pulled a cloth doll out of a plastic bag and Sherry noticed it. They began talking, realized that they shared a common interest in cloth dolls and a friendship evolved. They began to get together to work on dolls, tried out new techniques and see where it could take them. Any medium was fair game but both always returned to fabric and thread.
While their styles are quite different, they complement each other. They first collaborated on a project for Threadworks and their Alice’s Tea Party toured for a year. This is the first in a series of three articles about their latest joint project. Look for more in the Summer 2011 and Fall 2011 issues.

Sherry’s project uses stumpwork, hand embroidery and a beaded picot edge as embellishment. Lucy’s challenge was to use those techniques but incorporate them into a different type of project.
The leafy stripe of a decorator’s sample was centred along the spine of the journal. Additional flower and leaf shapes were fused into place while hand embroidery added further definition to the motifs.
Read more in our Spring 2011 issue.