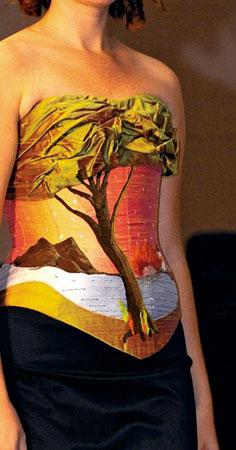 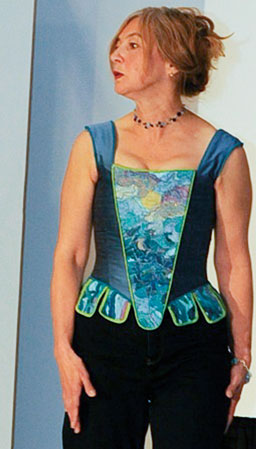 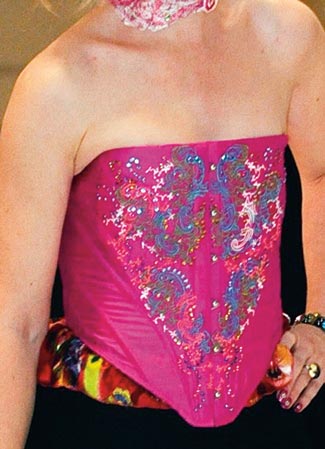 This amazing work of art is a corset in disguise (Photo 1). Inspired by corsets of the 18th century it was built and modeled by Kathi Posliff who added some contemporary details.
The most obvious is the fabric, fabric that Kathi made from several pieces of coloured silks, crystal organza and nylon tulle. She’s used two different techniques; one for the front panel and another for the rest of the corset.
It all started with silks on a sale table that Kathi could not resist. The ideas for the fabric then evolved. For the front panel she cut the silks into narrow strips only about 3⁄8″ wide and she began weaving them with a plan in mind. She wanted the new fabric to be darker at the bottom and get lighter toward the top of the panel. To do this took a lot of thought and some reweaving.  She started with a template of the final shape, weaving the fabrics on top of it so that she could see where the colours would end up. When the weaving was done she laid the piece upon crystal organza in a deep red. She then used decorative stitches on her sewing machine to sew the strips in place.
Photo 2 shows the woven silk strips sewn onto the bottom layer of crystal organza with decorative machine stitching that anchors the hand woven piece. It still keeps a light and seemingly more organic appearance than typical fabric as the weaving looks very 3-dimensional. The strips were cut and have been allowed to fray, adding to the textured effect.
To make the other panels Kathi used the same silk strips but opted not to weave them. She still used a crystal organza base, but laid the strips out parallel to each other and placed diagonally on the bias of what the grain would have been on each panel.
Read more in our Spring 2011 issue.