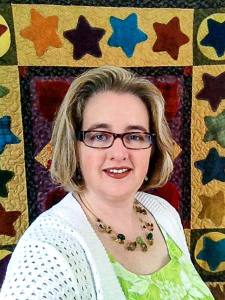 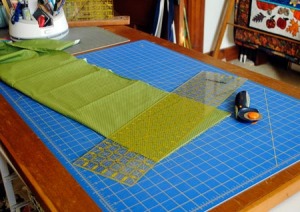 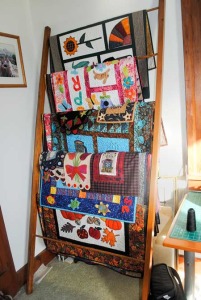 Christine has always been a sewer, from the time she was a kid making Barbie clothes with her mom, but it wasn’t until after she was married that she started to quilt.
She graduated in 1993 from University of Toronto with a Bachelor of Pharmacy and after she was married the following year, she craved doing something creative. She took a pottery course from her local college, but after making many, many lop-sided pots and bowls, she decided that pottery probably wasn’t her “thing”. Since she already knew how to sew and owned a sewing machine, she decided to take a beginner quilting class at the college and from the very first class she was hooked!

When she started quilting, she followed patterns like everyone else, but after a few years she started adding her own design elements to her quilts. The first original wall-hanging was called Everlasting Harvest, a piece that brought her close friend, Nellie Holmes, to encourage Christine to make a pattern of it. “I didn’t jump right in, as I had a two year old at home and soon became pregnant with my second child, but I kept designing and while on maternity leave in 2001, I started a pattern company called Fairfield Road Designs.

Since then, she published over 40 original designs as patterns, had designs featured in over 30 issues of magazines such as Create and Decorate, Quilter’s World, Quilts and More, British Patchwork & Quilting, Australian Homespun and of course A Needle Pulling Thread!
Read more in our Fall 2014 issue.