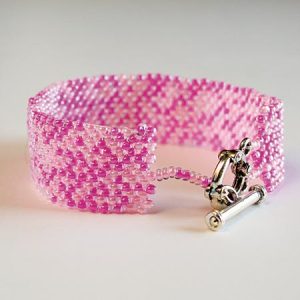 Imagine learning to make beautiful beaded gifts or accessories in three easy lessons! It’s possible with the help of passionate teacher Diane Mugford. This Hatzic Lake, British Columbia, designer considers herself a teacher first and a designer second because what she designs tends to be projects for her students.
“I am often asked to teach a program and I have to come up with a design that will be easy for beginners, but adaptable to increase the challenge,” Diane explains. “Many of my designs evolve because I am trying to solve a problem.” She says she had a watch that needed a strap, so she decided to bead a new strap. Then she decided she could make several and have a different strap everyday. The first project in Diane’s three part series beginning with this issue to teach peyote beading is a bracelet that could also be a new watch strap!
A lifelong stitcher, Diane says she comes from a stitching background in which the term meant using a needle and thread and doing the work by hand. “I’ve been a stitcher all my life, but I didn’t really become a beader until the mid-1990s when I stitched a canvas picture that had a lot of beads on it,” Diane explains. “I had beads left over and wanted to use them up, so I began buying magazines and learning about beading.”
Diane says she follows directions, but frequently modifies the project to suit her needs. She would like to inspire others to modify designs as well, such as turning the featured bracelet into that watch strap. She also encourages moving away from the beaded chart and consider taking any stitching chart and creating it in beads. She says once you have mastered the trio of peyote stitch styles that will be featured in A Needle Pulling Thread over the next three issues, beaders could take any chart from cross-stitch, for example, and make a beaded piece.
Read more in our Spring 2011 issue.