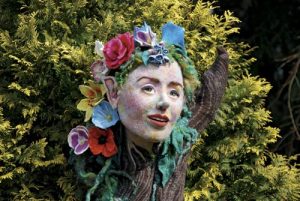 Near the tiny hamlet of Onondaga, in Ontario lives an artist with a difference. No paints and brushes here; this artist works with natural fibre. Nature is her inspiration; having been taught by her parents at an early age to see and appreciate its detail and variety, she is careful to marry her art to the science of nature. Leslie Samson holds a Bachelor of Fine Arts degree from Illinois State University, and sees potential in things most of us ignore and pass by. Fibre is her means of expression, and from it she crafts the most awesome items.
Following discovery of Angora rabbits, “an amazing fantasy animal,” she became entranced by the character and versatility of wool. The more Samson learned, the more excited she became. She stated, “I wonder at the marvel that is sheep wool, that soil produces grass, that becomes keratin fibre in a rainbow of textures and colours.”
She conducted a comparative analysis of the structure of sheep fleeces and other fibres, measuring various fibres and types, with a goal to understanding everything about wool. She wanted to know about the structure, the size, the function on the animal as well as its historical development.
Read more in our Summer 2012 issue.