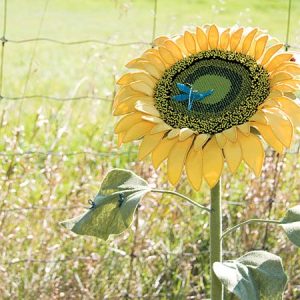 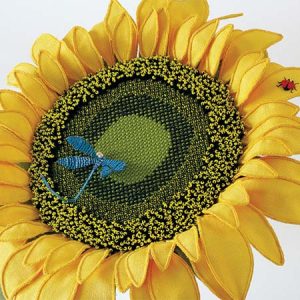 The sight of a field of sunflowers with their heads following the sun is a warm reminder of what Canadian summers offer. Despite their heavy stalks, one wants to grab a bouquet of these bright, cheery flowers as a reminder of warm, sunny days. There is no need to pick sunflowers; instead make a bouquet of Scarborough designer Janet MacLennan’s three-dimensional beaded sunflowers.
This project started as a challenge at Janet’s guild. Members were asked to make something for spring, but Janet was inspired to create the sunflower, which, she admits is more a summer flower. So, she called it Global Warming Sunflower!
Janet lived in Australia when she was a child, while her miner father worked in that country. She went to school in Sydney and was separated from relatives who might have guided her creativity. Instead, she was introduced to many crafts by a teacher who challenged her class to make raffia animals. Later, the class was given wool and taught to knit and that’s when Janet’s creative muse took flight.
“I knit my entire ball of wool in one day,” Janet recalls. “I just loved it. Later, we did some needlepoint.” Years later, she sees the errors in that piece of needlepoint, but back then, she was excited to be doing something so interesting. Wool was easier to come by and Janet focussed on knitting until she ended up in Toronto where she saw there were many more creative possibilities.
Read more in our Summer 2009 issue.